Tales of Our Voyage

Sailing in Cuba is unlike anywhere else; out-of-date charts, a GPS offset, growing reefs and damaged docks make for challenging navigation.

But the experience is unlike any other! Charismatic, historic, secluded, vibrant… Cuba wears many faces.

Jeff (shhh), joined Juliet, Francisco and Monica on our first trip heading East out of Cienfuegos to finish in Santiago de Cuba.  It was a first trip to Cuba for all of us and we were excited for new adventures; we didn’t realise quite how useful Francisco’s Spanish speaking skills were going to be to us!

Our first stop for a shore visit was in the stunning, historical town of Trinidad, complete with cobbled streets, rooftop restaurants and artisanal stores and street market.  We lucked out with our taxi driver, Johnny, who drove us around in one of those old Chevy’s and helped us hunt down fresh fruit and veg, bread, meat and eggs… these had to bought from the local provisions under cover of darkness and were probably some of the most expensive eggs I’ve ever bought!  We bought jewellery made of cutlery, ate lunch in someone’s garden, and had a proper Cuban Salsa lesson in a run down cafe courtyard.

Johnny took us off to a park area near Trinidad, we walked through the woods and along the riverbanks to a waterfall pool for a swim.

Heading off the mainland again we island hopped down the Jardinas de la Reina – the Gardens of the Queen; a series of offshore islands that time has forgotten. Sometimes we stopped in mangrove bays, sometimes we anchored off long white sandy beaches, often we had too much wind for swimming, but always great sailing.  The stops we explored were largely deserted and were some of the most pristine beaches I’ve ever seen.  Occasionally we came across some of the Guardia Frontera, the border police stationed on the island for weeks at a time, with a television and radio, but not much else.  They were always delighted to see people and to tell you about their posting, introduce you to the local wildlife, or their tracks, and to share one of your beers!

We caught fish; mainly barracuda, and we extracted conch from their shells, with difficulty! and made conch fritters; we also made bread… a lot.  I ran out of flour and had to beg some from the sole other cruising boat we saw on this part of the journey.

By the time we reached the mainland again, we were hungry for some time ashore and human interaction but the Guardia wouldn’t let us get off the boat in Cabo Cruz.  Some local teenage boys swam out and offered to catch us some fish and lobster which we gladly accepted… after quite a long time, they returned, swimming, with a small catch in exchange for the tourist gold…. CUC’s ( the equivalent of US dollars).  We had to make do with a dinghy tour along the shore admiring all the places we couldn’t visit.

Not officially an approved stop, the Guardia at Chivirico were the most friendly we encountered anywhere in Cuba; they guided us in through the narrow channel into a lovely quiet pond where we could anchor for the night.  We sat and had a beer under concrete toadstools, wandered into town along the dirt roads, watched fishermen on the beach, supported the local football prodigy, and enjoyed mixing with other people after a week away from civilisation.

A bustling feast after the escape and tranquility of the previous few days, Santiago is a big, noisy city full of beautiful old cars, characterful rooftop restaurants, lively music bars and smiling people.  We danced, ate, laughed and watched the army fire the cannon for sunset from the hilltop fort.

Cuba… it’s not like anywhere you’ve come to know… 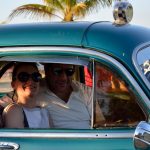 It was wonderful, amazing, hard work anchoring, but a great laugh and a holiday that we'll never forget. It was full of adventure, great sailing, personally learned loads, but most importantly great company.  Ibis V is very lucky to have an owner like you; you made the trip and please keep on going 🙂 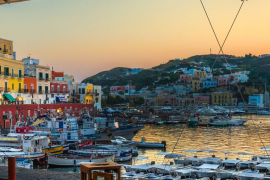 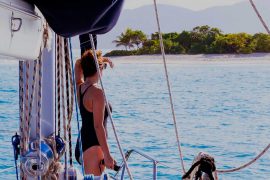 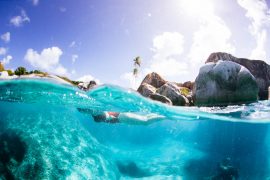